Rita had severe abdominal pain in the first half of 2002 of unknown origin, unrelieved by anything including several laparoscopies and dx laps. She finally ended up opting for a hysterectomy due to this. Within six months her body began to go haywire and thus started her chronic pain and illness cycle.

In 2006 Rita had a pulmonary embolism, which she thought was an asthma attack.  She was treated and on Coumadin for a year.

In 2008 she had a massive blood clot and severe swelling in her left leg (about three times its normal size, see the picture below). Rita was hospitalized for almost a month on heparin drips and placed on blood thinners for life. Coumadin failed to work because her INR wouldn’t stabilize and later  Arixtra, Lovenox and Eliquis did not even work due to hypercoagulation.  She is currently on Lovenox and Eliquis, which is dangerous, but her only choice at this point. 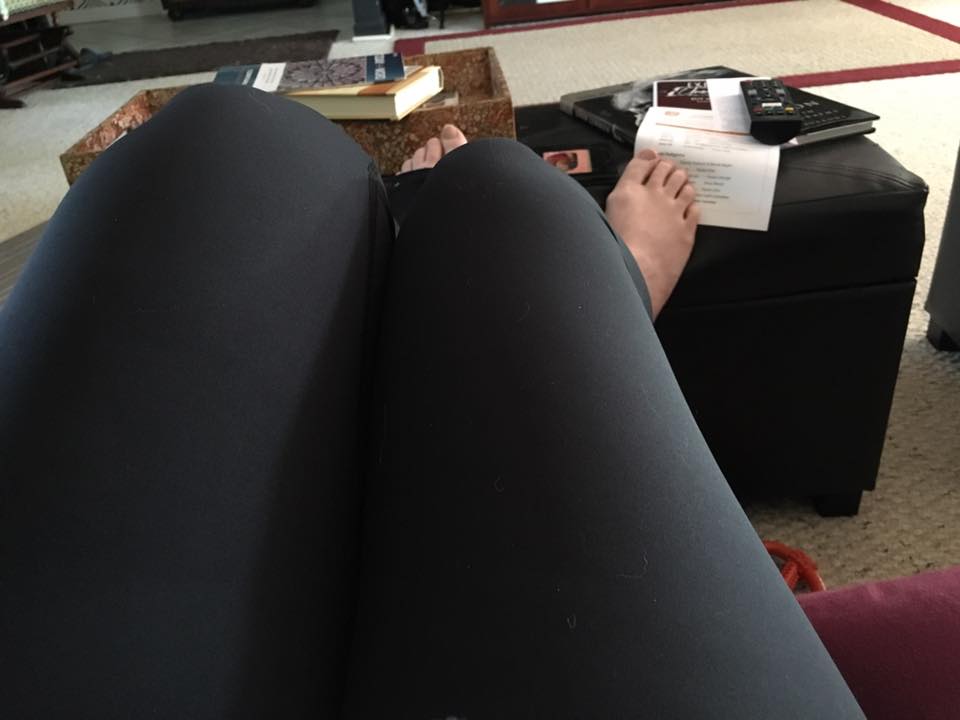 Late 2012 ER visits and CT Scan with IVP dye, showed Rita was misdiagnosed by many hospitals and other clinics. Later her interventional radiologist  at the hospital told her that she had May-Thurner Syndrome (also known as the iliac vein compression syndrome, it is a rare condition in which  the compression of the common venous outflow tract of the left lower extremity may cause discomfort, swelling, pain or blood clots, called deep venous thrombosis (DVT), (in the iliofemoral vein) had been present since the CT Scan was done at hospital with the blood clot in 2008. It is said to be a  malformation one is born with.

Jan.2013 another hospital found MTS (May-Thurner Syndrome) and acted quickly and stented her iliac vein. A few months later doctors had to rewrap stents with two others when they did not hold up.

Rita’s case is so difficult they recommended she should stay with one hospital for continuity of care. Knowing she was getting worse, she knew her body extremely well, but had a hard time convincing doctors not familiar with MTS and NCS (Nutcracker Syndrome, the compression of the renal vein and mesenteric artery), of severe pain, distress and anxiety. They would write off her feelings with disregard. She could not even get a vascular surgeon to consult at that time, thus the Cleveland Clinic visit.

May 2013 Rita visited the Mayo Clinic Florida to see a specialist and once again no reason was found for her pain, discomfort, and  ability to maintain a normal functioning lifestyle and was told they could nothing.

March 2014 Rita went to Cleveland Clinic in Ohio (spent two months and traveled far, emptied her savings trying to save her life), and saw a vascular surgeon  who stated that her blood flow was fine. She was dizzy, nauseous vomiting, passing out, extremely weak and was sent to pain management. The pain management doctor sent her to the ER immediately, where she was admitted after insisting to four physicians they walk her around the ER and one finally listened and she passed out five steps from the bed.  They set up an appointment with a vascular surgeon who agreed that her blood flow was not fine and on March 26th, 2014 a venogram and 3 more stents were placed. The abdominal webbing was removed at that time and angioplasty was done to the veins and Anjio Jetting of the abdomen and leg.

August 2014 Rita was diagnosed with severe adrenal insufficiency due to the femoral collapse. She tried oral medication but it was not effective. She currently gives herself injections of SOLU-CORTEF® to be able to reach any functional activity in order to just get to MD visits.

She has been diagnosed with POTS (postural orthostatic tachycardia syndrome), Dysautonomia, and several other factors that has her 100% convinced that she has NCS (Neurocardiogenic syncope), but can’t afford to go see the specialist that knows how to Dx it because it’s so rare.

Presently all of her various symptoms and problems are now lining up and making sense to the root cause. When she started researching, she found that standing and sitting aggravated NCS. Brain perfusions, backflow of blood, adrenal issues, left flank pain, chest pain, low BP, dizziness, nausea, left sided body issues, orthostasis and many other symptoms are inflicting Rita

The main problem now is severe left back pain, burning feeling shooting pain from back down her left side. Her left leg feels like someone is trying to amputate it with a dull saw while another has lit fire to it.  Sharp pains in the abdomen, leg, kidney and heart on left side, loss of appetite, dizziness, blacking out, severe tinnitus, extremely swollen left leg, swollen abdomen, migraines, severe pressure from blood blood pooling, vomiting, overall extreme pain and feeling of her body boy not being well.

Rita’s Pain management Dr. has now increased dosages and changed her RX to Dilaudid (she has been on everything), which helps a little, but not much. Her anxiety over all of this has reached its threshold. She feels that she is  just left hanging with no one that seems to want to help or even to suggest a local Dr. that can help with her situation.

On July 23rd of last year, she was admitted by a vascular surgeon. Rita  had clots from left mid abdomen through her stents down her leg. She was on a heparin drip for 8 days, where she was promised that they would do some intervention but they did not. They simply shut off the drip and placed her on eliquis then sent her home. The next week at a clinic visit, the vascular surgeon said “I do not do these procedures’. You have to wonder why was she was  told to go there by this doctor’s staff resident. He further stated, that the interventional radiologist (IR) chose not to do anything at that hospitalization time and the doctor did not know why. He could not speak to  him due to the fact the IR was on vacation and  a turnover to a new computer system so  he could not see Rita’s records.  One of his residents in the hospital had told Rita it was because she had a positive blood culture. However, the next two blood cultures were negative and she was not sent home on antibiotics. She still doesn’t  know why something was not done .  Her family was told  that the hospital would be in touch with dates and the name of another IR. After many phone calls, promised to  return calls and then none, everyone’s vacation times, Rita had surgery the beginning of September and by grace, the clots left were able to be broken through Anjio Jet once again.

Rita had several more surgeries and then was placed in the hospital for clotting again March 24. Rita coded for the second time from anaphylaxis to IVP dye. This is the only way to see the venous system completely. She then underwent another venogram for the clots and TPA, which is a gruesome catheter that is inserted through the neck and put down the chest and run through her abdomen to her leg. Unfortunately after 24 hours of this, she was told that she was  clotted through and through from her left leg to her iliac all the way through her stents. The clots were as hard as concrete and she continues to clot. She has no blood flow from her left leg up and it is getting worse day by day.  Rita’s  pain is off the charts.

Rita is very exhausted, praying, for an answer and help. She is  unable to shower or even change her bed sheets. She sleeps continuously due to meds and severe adrenal problems. Her family prepares her meals, washes her clothes, does her  errands and shopping for her her personal needs. Rita wants pain relief. She has not been out to a store in months. Rita is still young and she  just wants a few good years out of her bed and at least be able to go out to dinner and see a movie. Rita is living as an invalent and hermit at this point and only leaves her home to go to doctors visits and the hospital.

Rita was recently sent to the ER where she finally talked the doctors into giving her ketamine injections. She saw instant relief. Unfortunately her insurance will not cover a series of ketamine infusions. These infusions will cost her around $8,000.00. She needs our help in resetting her opiate receptors with ketamine infusions. The hospital sent her home on palliative care. The palliative care nurse visited her and stated that they could not help her and to go back to pain management which is not helping her.

There is a possibility that a doctor out of state in Ohio can remove these stents that have made the clotting worse. It is said that he is the only doctor in the world that can help her. If this happens she may be able to get this procedure done which is very risky.

Our goal is to raise $8,000 for Rita for ketamine infusions to reset her neurotransmitters. No one deserves to live this way. What has been done to Rita is inhumane. We also need to find a lawyer for her that would be willing to take her case. Her body is in constant rejection of these stents. She has eight total now. Rita wanted amputation and the doctors refused and put the stents in giving her no other choice. Since then, we have done her DNA. Rita is complying and eating a very clean organic diet and staying away from processed foods as well as GMO’s. We would like to raise even more than $8.000 so we can get her Cyrex testing to see what exact foods are causing inflammation. It would be nice if someone knows an employee at Cyrex who could donate labs to her.

While writing this last paragraph, Rita is being rushed to the ER again for uncontrollable pain.  Rita has formed another clot. If they have to give her contrast to bust the worst clot she has ever formed, she will most likely be on life support again.

Here is a link to Rita’s PayPal.  PayPal.me/RitaWelch

About the Author: Sterling Hill Erdei